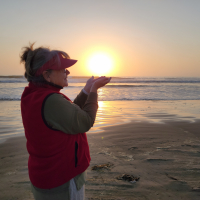 DannyB Superuser ✭✭✭✭
July 2022 edited August 2022 in How do you Simplifi?
Closing the curtain on June!

So June was quite the month.  We got out of town a couple of times, lots of taking care of grandkids now that school is out, finalized travel plans for rest of summer and into the fall!  And through it all, Simplifi help us keep track of our spending and the use of some of our Savings Goals.  And once again,,, it's green all the way!

All planned and expected income "Received"  Still need to look into why some of my transfers to savings show up in my Income and other's don't.  Again, the ones that show up are marked as Ignore in spending plan and reports since they are transfers, but still wonder why some show up and some don't. It's certainly not a big deal, just one of those, "Hmmm, that's strange." kind of things.
All expected bills show a gratifyingly green "Paid" across the board  I didn't have any missed bills show up this month and I'm 99.999% sure I've captured all our monthly, semi-monthly, semi-annual and annual recurring bills.  I enjoy being able to see the list of monthly recurring bills - it gives me peace of mind and a sense of control over that piece of our budget month-to-month.
Subscriptions - All PAID  ...and one subscription cancelled! The tricky subscriptions are the ones paid annually.  Seeing the list of Subscriptions in one place makes it easier to insure we aren't paying for stuff we don't want or use and keeping those that add value to our lives in line with what we pay for them.  Right now I list our cable service (yes, I'm still using a cable service! I know! I know! this is 2022 but I just can't quite get myself to "cut the cord" as they say) but I list my cable payment as a recurring bill and I list all our streaming services as recurring subscriptions.  I'll leave it like that for now since both the cable service "bill" and the streaming service "subscriptions" are categorized the same.
Savings Goals  All goals were contributed to as planned to meet each goal's timeline.  Two refinements to note: First, I will move a couple more Planned Spending categories to Savings Goals.  Along with others, I would love to see the development team add a roll over function to Planned Spending but for now this is the best way I can figure to make sure I plan for and cover non-monthly/irregular expenses. Second, one of those non-monthly expenses came due in June, Quarterly Estimated Taxes. That goal is now complete and paid.  I have set up and started funding the next payment due in September.

Now I'll wait to see if I am awarded any of those nifty achievement badges!  The badges I'm having difficulty earning are the Savvy Spender - can't seem to make it past 1 month! And the Prompt payer badge... Still waiting to get the first one of those.  Didn't get it in May even though as far as I could tell everything was paid.  We'll see about June.

That's it!  Thanks Simplifi for this great app!
Danny
Simplifi user since 01/22
” Budget: a mathematical confirmation of your suspicions.” ~A.A. Latimer
Tagged:
1
This discussion has been closed.